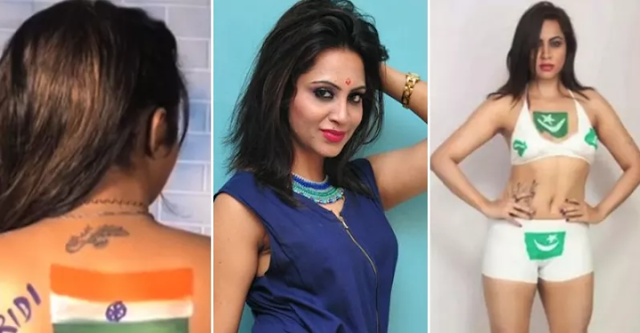 Arshi Khan, the self-confessed seduction queen, is creating a lot of buzz in the Bigg Boss house. She knows very well how to be part of controversies and headlines: be it her infamous stint with Shahid Afridi, calling him ‘mehboob’, or flirting with co-contestants in a lustful manner. She is also popular for posting her raunchy photos and videos on social media. In 2016, an explicit video of Arshi had gone viral, where she had stripped happily for Shahid Afridi and Team India.
She is in the news again and as per India.com, a Jalandhar court has issued an arrest warrant against Arshi for not attending the proceedings for the past three months. The court ordered police to enter the Bigg Boss 11 house and arrest Arshi.
The case against Arshi was filed by a lawyer in Jalandhar for painting the national flags of India and Pakistan on her semi-nude body.
This is also the second arrest warrant against her. She has skipped the trial for the third time.
Arshi’s publicist Flynn Remedios said that even though the arrest warrant is still valid, he managed to get a stay order. The stay will be valid till January 15, 2018. He said if Arshi Khan attends the court before that, the warrant may be cancelled or else the police will execute the warrant.
Total
0
Shares
Share 0
Tweet 0
Pin it 0
Share 0
Share 0
Like 0
Share 0