Home Entertainment Urfi Javed opens the button of the pants in front of the camera, the speed of the heartbeat will increase after seeing the photoshoot!
9 views
2 minute read

Urfi Javed opens the button of the pants in front of the camera, the speed of the heartbeat will increase after seeing the photoshoot!

Urfi Javed has got the hottest photoshoot done. She has opened the button of the pants in front of the camera and posed for pictures in which she is looking bold than the limit. The pictures are being fiercely liked and shared.

Urfi Javed keeps setting social media on fire with her boldness. She often shares such pictures of herself which creates panic on the internet. Once again Urfi Javed has increased the heartbeat of the fans. She has shared her latest photos, seeing which your senses will fly away. The pictures are being most liked and shared.

Urfi Javed has shared pictures of her new photoshoot with fans on Instagram account, in which she is seen wearing a bralette. Along with this, she is wearing pants whose buttons she has unbuttoned. Urfi is looking hot in this look. Fans are liking this avatar of him very much.

Urfi Javed has curled her hair lightly. She is wearing designer earrings in her ears and looks gorgeous in a necklace worn around her neck. Fans are blown away by this look of her and she is being praised a lot in the comment section. One user wrote, Uff. Another commented, after hearing the name of urfi, the flower understood what fire is ma’am. Someone wrote, Very hot.

The bralette was seen adjusting

Earlier, Urfi Javed shared a video of herself in which she was seen raising her bralette in front of the camera. Urfi looked very glamorous and bold in this video.

Here is her VIDEO!

This music video of Urfi is creating panic

It is worth noting that recently the music video ‘Hal Chal’ of Urfi Javed has been released in which she appeared in the role of a Punjabi girl. This song has been written by Korla Mann and she has given her voice. she has sung this song with Gurlej Akhtar. This song has become a hit as soon as it is released on YouTube. This video song has got more than one crore 50 lakh views so far. 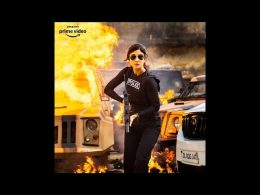