Pratik Sehajpal apologized to Neha Bhasin but she said that she is done with their friendship.

As Big Boss season’s upcoming episode has come up with the half-completed story of the last episode of the Big Boss. During the last episode, there was a fight between Pratik Sehajpal, Nishant Bhatt, and Neha Bhasin.

After the fight, we are seeing that Neha was upset and talking about this fight with Umar Riaz and Vishal Kotian. During this Vishal noticed the Pratik Sehajpal and said that Neha and Pratik are like Tom and Jerry. On this Neha Bhasin made her hand gesture just as she has done with Pratik Sehajpal. On this Umar added his point by saying,” Pratik was happy when you entered but when you asked him to stay away, I felt something is wrong”.

On this Neha Bhasin clarified her point by saying,” I respond to kindness but it doesn’t mean I am ch***ya.” Umar asks her what made her decide not to talk to him. Neha replies, “I stopped talking to him from outside. It is not that there is no friendship or love. But our temperament doesn’t match. He doesn’t know how to talk. He will get angry a lot and then apologize a lot. And this is happening every time”.

We have seen that after the fight has taken place Pratik Sehajpal has come to Neha Bhasin to apologize to her. But Neha Bhasin said hi, to stay away from her, as she was not in good mood to talk to him. 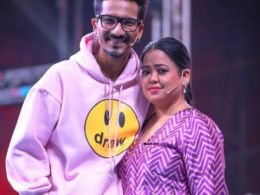 Pregnant Bharti Singh, who was saved from falling on the set