Urfi Javed, who is recognized on social media with her fashion sense and impeccable style, has shared some photos of her latest photoshoot with fans on Instagram. A different style of Urfi can be seen in these photos.

Brown pants with neon pink bra are carried by Urfi. The funny thing is that while doing the photoshoot, Urfi has kept these pants unbuttoned. In such a situation, the actress has also come under the target of trolls.

With this entire outfit, Urfi has done pink hoops, brown lipstick, and nude makeup. The hair is kept in a half ponytail and half-open look. One user wrote, “Didi, your chain is open.”

Another user wrote, “Hey letterbox left open.” Urfi Javed often comes under the target of trolls due to his outfits and fashion style. Nowadays Urfi is in Chandigarh. His photo shoot is going to run there for two days. Urfi may not be seen in many projects, but with her bold and sizzling looks, Urfi remains in constant discussion. The popularity of Urfi Javed is such that one of his Insta posts creates panic on social media. These days, Urfi Javed has become that celebrity, who has fans as well as trolls.

The matter is the same whether you love them or troll them, you just can’t ignore them even if you want. Whenever Urfi Javed is spotted in Mumbai, she is seen in her extra range clothes which later become a topic of discussion on social media. 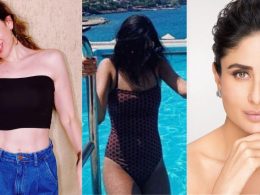 In front of the beauty of Karisma Kapoor’s daughter, Film actresses fail in front of glamorous style