Jumanji: Next level unleashes its savagery in its final trailer

The sequel to the 2017 movie will debut in theaters on December 13; Dwayne Johnson, Karen Gillan, Jack Black, and Kevin Hart are back.

We hope that you have prepared your dice and your desire to immerse yourself in a new adventure: Jumanji: Next Level is preparing to reach theaters on December 13, and from Sony Pictures Entertainment they have presented the final trailer for us to go making an idea of ​​the trip that awaits us in theaters You can enjoy it below:

On this occasion, our protagonists return once again to the dangerous and exotic game of Jumanji, but their characters in the game have exchanged with each other. This wild world is undergoing inexplicable and strange changes, so our protagonists will have to embark on a dangerous adventure to discover what is really happening.

The world of Jumanji is no longer as you remember

Things in Jumanji, in short, are not what they seem to be. With this premise, players will have to dive into unknown and unexplored places so far, “from barren deserts to icy mountains” … and, hopefully, escape from the most dangerous game in the world. The cast is also completed with Danny DeVito and Danny Glover, along with singer Awkwafina and Nick Jonas.

Although the 2017 film managed to get 962.1 million dollars, it remains to be seen what the collection of Jumanji is: Next Level. The truth is that Sony has high expectations in the sequel, as it expressly chose its premiere in December to compete with Star Wars: Episode IX – The rise of Skywalker. In this sense, the performance of both films at the box office will be even more interesting: who will win? 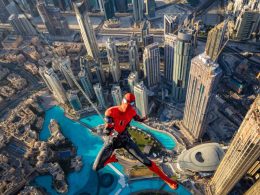 Did actress Deepika Padukone charge 20 crores for her upcoming film?